Before we set out on the trekking tour through the nomadic country of Ladakh, the Changthang, and climb a 6000 meter peak, we immerse ourselves in the Buddhist culture of the country during the acclimatization phase.

The trekking tour leads in 12 days over high plateaus and passes, through largely deserted territory, where we will often meet only wild asses (Kiang), yaks and eagles for days. Only here and there we will pass nomadic camps. The highlight of the tour is the ascent of a 6000m peak of the Mentok range. After the descent we will go to the Tsomoriri Lake and back to Leh.

2290EUR
Single Room/Tent Supplement: 250 EUR
Attention: On this tour we spend some nights in tents. Bringing a good and warm sleeping bag is thus urgently necessary (best to -10 degrees centigrade comfort range – the nights can still be very cold especially on the Tibetan plateau). The tour is not suitable for people who need a hot shower every day.

Arrive Delhi in the early hours of the morning and transfer to the domestic terminal for the next flight to Leh 3450m.

NOTE: All passengers have to collect their baggage after going through the immigration processes and before leaving the international terminal and later recheck into the domestic flight counter, EVEN if the flight ticket has been booked with the same PNR numbers. Please make sure that you arrive at the domestic airline counter 2 hours before the scheduled departure. The time between the flight’s landing till you pick up your baggage from the baggage carrousel through immigration should be at least an hour, depending on the number of flights arriving around the same time causing long queues.

Day trip to the 11th century temples (The Chamchung, Chamba Lakhang, and Serzang Lakhang) With exquisite murals of various Buddhas an Bodhisattvas, especially the five Tathagatas (the Five Dhyani Buddhas) and their female counterpart are among the rarest Buddhist iconographies still existing and intact.  Basgo, perched on a mud hill houses a 14-meter-high, gilded statue of the Maitreya Buddha from the 16th century, besides magnificent murals depicting vignettes from the life of Buddha and portraits of the temples’ benefactors.

On our way to Rumtse, the last permanent village on the way towards Himachal is also the part of the villages to be settled by the first settlers of Ladakh. We visit the monastery of Thikse and hemis before driving through the beautiful Miru gorge after leaving the Indus valley at Upshi. Though it is possible to drive all the way beyond Taglang la, we avoid it purposely to acclimatise one night just above 4000m. At the camp we meet our kitchen crew and horseman. Overnight in tent.

The valleys along the broader Zara chu valley are temporary homes to the nomadic people of Kharnak.

Trek to Narbus (4780m) over Narbus La (4860m) in around 5-6 hours.  Narbu or Narbus is on the plains of Skyangchuthang (The plains where the Tibetan wild horse called kiang roams) and 4 kilometers away from the Leh –Manali road. During June and September months, we can trek along the Tozay chu and later follow its tributary, the sumkhar chu from pang, where they both merge.

Today we trek from the North West to the south east direction on the Skangchuthang plains and cross the Leh – Manali highway.  Of course we do not walk on the highway but witness the tourist hurrying to their next destinations in full swings. It takes around 5- 6 hours before we arrive on the bank of Sumkhar chu at our campsite called Numa.

We trek along the Sumkhar chu (water, river, stream) valley and sometimes requiring to cross the same water several times as the meandering water changes its course from its left to the right banks. We walk several hours in this valley before turning left and very gradually begin to ascend towards Thelakong pass (5020m) which is quite soft and easy except the high altitude and enter the Phirtse valley where we will be camping until Kiangdam on the southern shore of Tsomoriri.

The Phirtse valley trek runs parallel to the Korzok range which has many 6000m peaks including the Mentok group. Various other valleys enter into the main Phirtse valley, including the broad Pangyo chu.  The 5-6 hours hike is on a very gradual path in the valley of the nomads and wildlives

After a leisurely breakfast, we hike up the valley on our left and gradually ascend to a spot at the junction of two smaller valleys at around 5050m.  The campsite is the base for climbing two of the Mentok summits.

Rest day to be used on the day

We climb up the valley for around 4 kilometres until we meet the snout of the glacier falling from the mentok peak and walk along it for another 100 meters before climbing onto the saddle with average altitude of 6000m which lies between the Mentok 1 and 2 and traverse the same towards our summit. The summit offers 360 degree stunning views of the numerous high peaks, including the Gya peak at the Tibet-Indo border, Chamser and Lungser, the Korzok range peaks and many more beside the huge lake just beneath it! Descend to the camp base camp and further to Manechan.

Kyangdam is on the southern shore of the lake Tsomoriri at the end of the long Phirtse valley in which we spent several days. It takes around 4- 5 hours. Kyangdam is on the Korzok – Kibber trek route and is an important resident for various breeding birds and home to special mammals of the Tibetan Plateau.

We trek along the lake’s shore to our camp at Kharlung serlung just a couple of kilometres before the crowded Korzok village and beneath Mentok kangri from the northern side.

We hike a little more towards until finally our cabs reach us and then drive back to Leh via the settlement of Korzok at Tsomoriri. 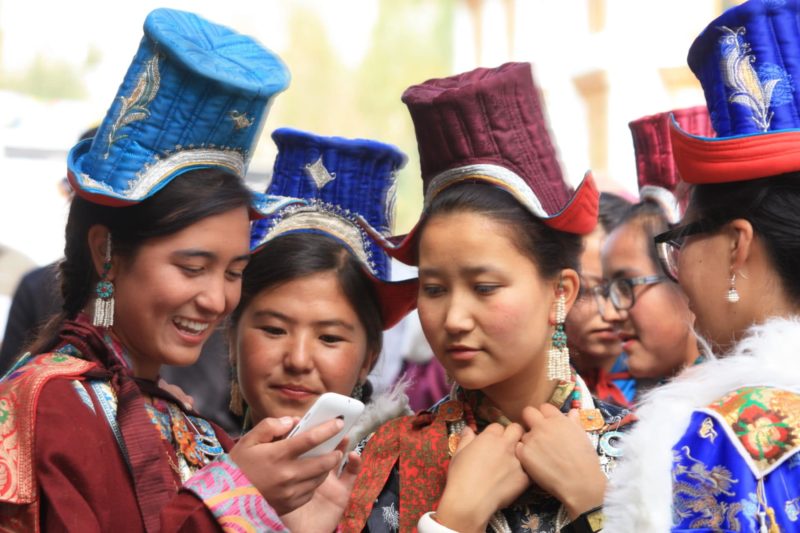 Flight to Delhi, we will transfer you to a centrally located hotel in Delhi. It is relax day for you in Delhi

Sightseeing in Delhi and evening Transfer to International Airport

Today we organise a sightseeing of Delhi covering some important tourist destination like the beautiful Red Fort (Lal Qila) built by Shah Jahan in 1648 which served as the seat of Mughal power until 1857. This stunning structure with its tall, red sandstone walls covers an area of more than two square kilometres,

The Jama Masjid is one of India’s largest mosques and was the final architectural feat of Shah Jahan. Completed in 1658, this beautiful structure features three gateways, four angled towers, and two 40-meter-high minarets built using red sandstone and white marble and attractively alternated in vertical stripes.

Humayun’s Tomb, situated in a lovely, large square garden, is a lofty mausoleum constructed of white marble and red sandstone. It was designed as a prototype of the Taj Mahal in Agra and is an excellent example of Mughal architecture.

The galleries of the National Museum, New Delhi: one of the largest museums in India following a historical sequence, with all major periods represented. Highlights include archaeological finds, along with exhibits of terra-cotta toys, images and pots, jewellery, seals, bronze and copper implements, sculpture, musical instruments, tapestry, tribal masks, swords, and murals.

After the sightseeing we bring you back to the hotel for a wash and change and later in the night we transfer you to International Airport.

Basic Data for the tour Nomads, Lake and a 6000er Peak 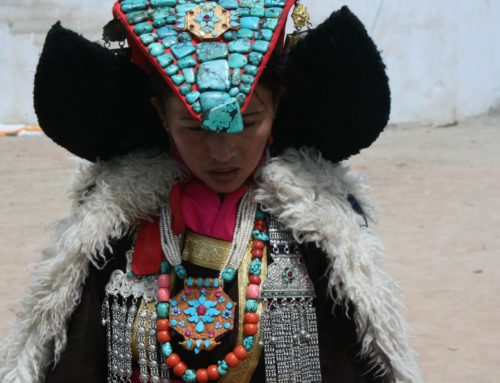 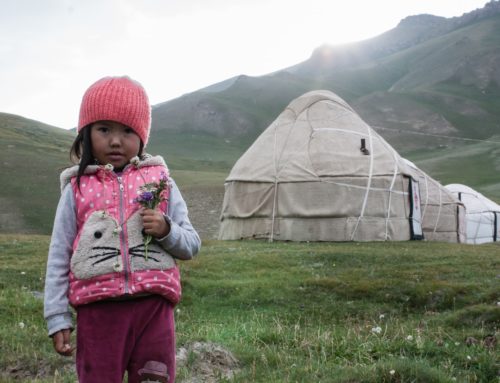 Culture and Hiking in the Nomad’s Land Gallery

Culture and Hiking in the Nomad’s Land 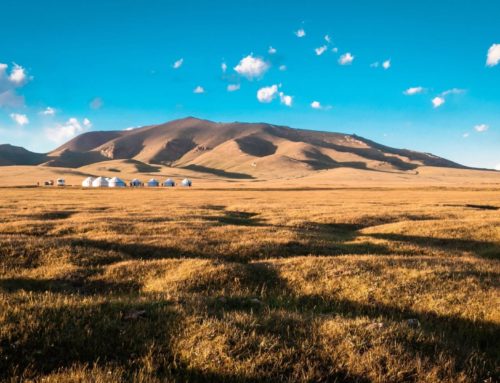 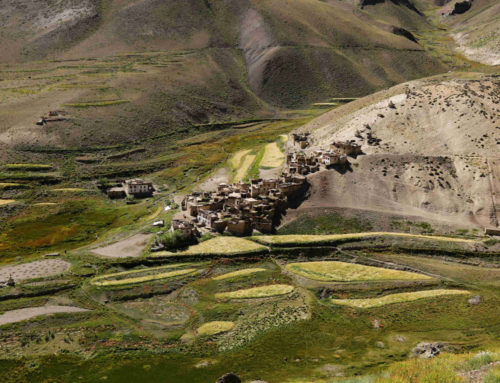