Whoever has visited a Tibetan Buddhist monastery, no matter if in Ladakh, Tibet or Bhutan, has also probably noticed, usually at the entrance of the temple, a drawing of the Buddhist Wheel of Life. This symbolic representation, or Bhavacakra, serves as a wonderful summary of what Buddhism is, and also reminds us that every action has consequences. It is no coincidence, then, that this concept, and its colorful representation, are explained very early in the life of every child.

The Buddhist Wheel of Life: Part 1 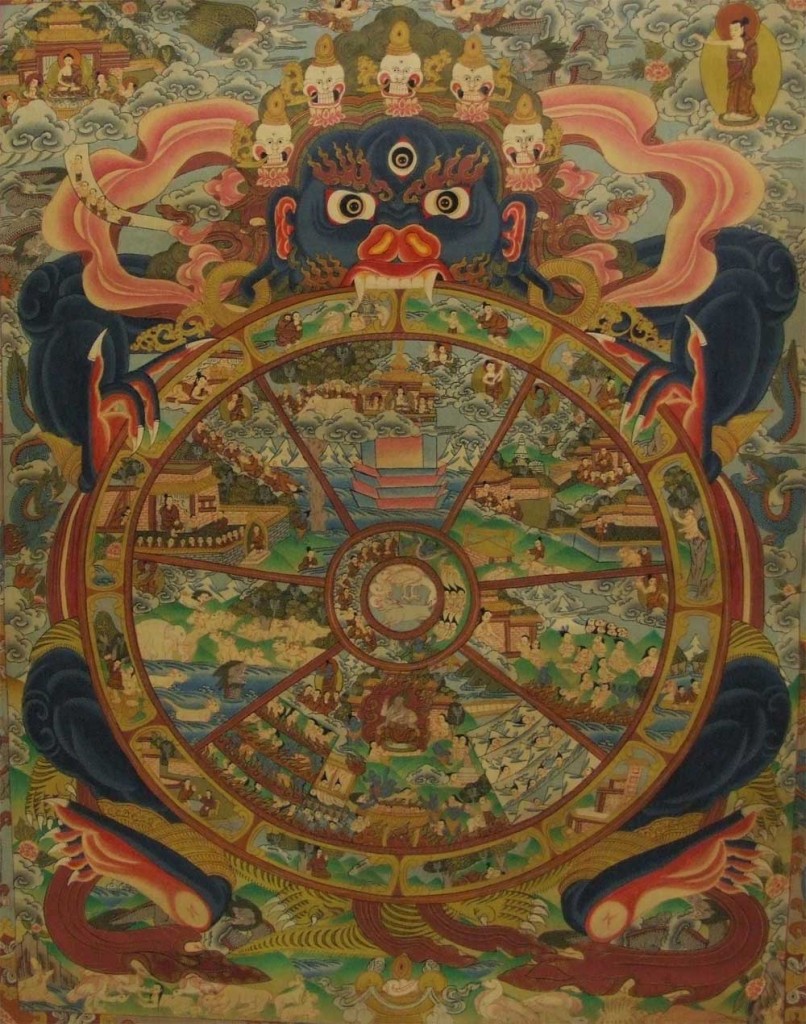 The wheel of life is held or supported by a wrathful deity that usually represents Yama, the god of death, but can also occasionally be interpreted as Mara, the god of seduction, or Srinpo, a mythical giant. 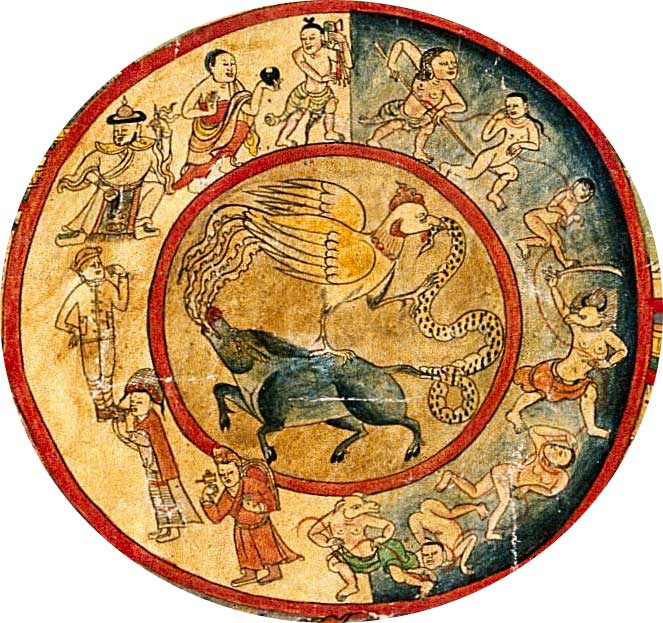 At the center of the wheel of life there is a smaller circle. The wheel turns eternally, powered by the three animals in it: a rooster, a snake and a pig. They bite each other’s tail and symbolize the three poisons of life: the rooster stands for greed, the snake for hatred, and the pig represents ignorance or delusion. These three poisons are the ones that keep us trapped inside the wheel of life. The goal, then, is to free ourselves from this infinite cycle of rebirths.

The inner circle is surrounded by another one divided in two halves: shadow and light. In the dark half, the doomed, tied to one another, are dragged and tortured by monstrous demons. The brighter area is filled with people who have to eke out a better (or at least less horrible) existence.

The six realms of the Wheel of Life

Around the inner circle we find the six realms in which we can be reborn. We start with the less than ideal areas:

1. The world of hungry ghosts 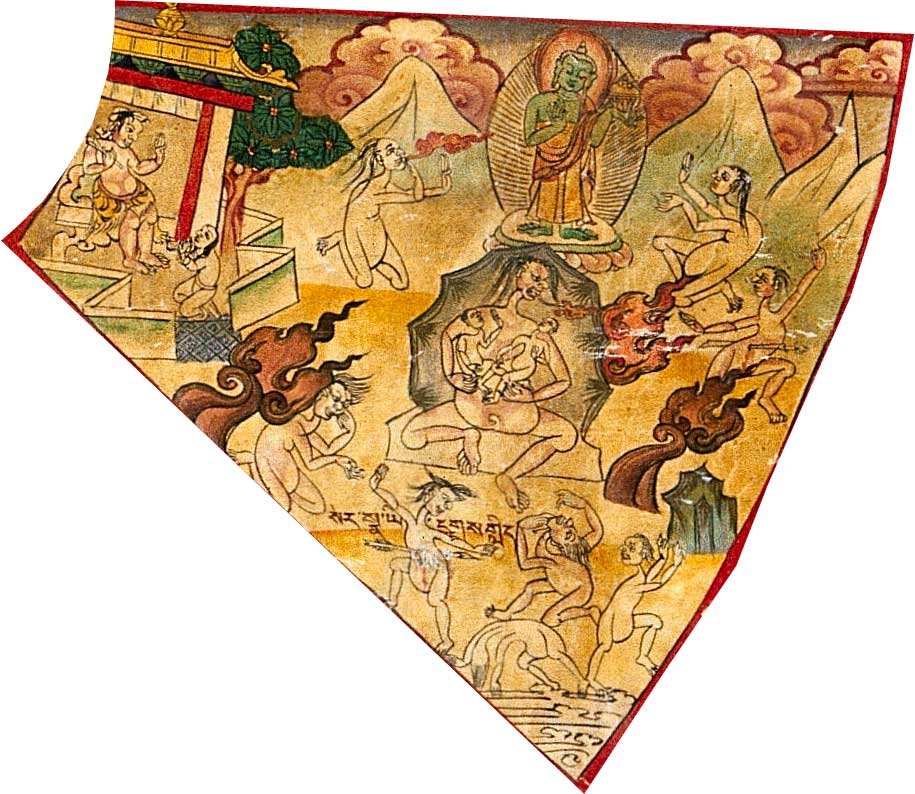 Due to their narrow necks and throats, the hungry ghosts are unable to eat, and must therefore suffer maddening hunger and unquenchable thirst throughout their whole existence. It is mainly their greed that brought them to this realm. In this realm of unfulfilled (or unfulfillable) desire, the Buddha is represented with a jar full of nectar, symbolizing the virtue of generosity. To put it in simpler terms: this is how your karma looks when you are selfish and greedy. To avoid such a fate, be generous and make sacrifices. 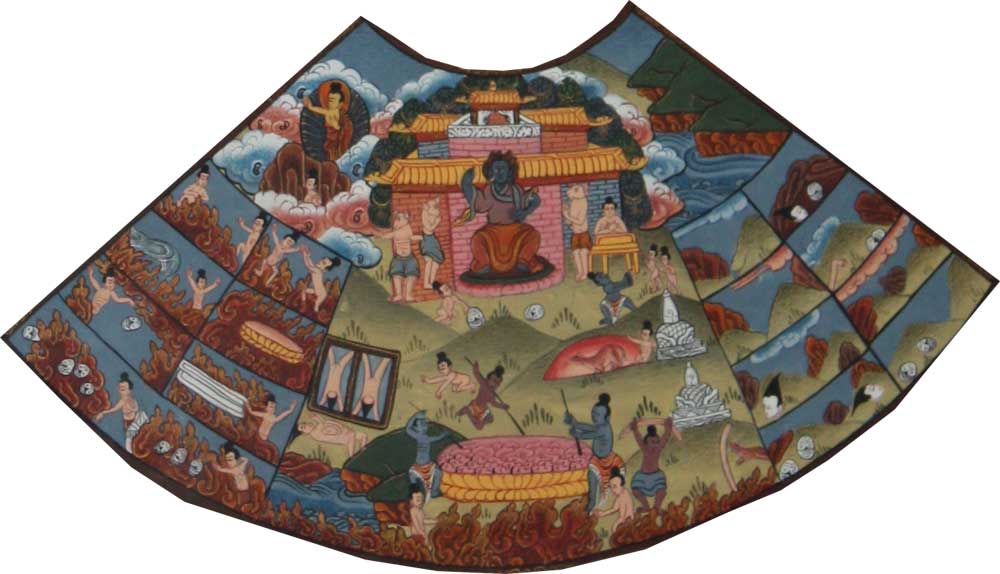 Whoever ends up here will suffer unimaginable pain, impossible heat and immeasurable cold. The depictions of Buddhist hell vary and recall in many ways those of the Christian one. The condemned, burning slowly over eternal fires, see their members and genitals chopped off before being cooked and eaten by insatiable demons. Once again there is a Buddha, in this case washing and cleaning with water the path that leads out of Hell. The simple explanation: anger and hatred are the way in; patience, the way out.

3. The realm of the animals 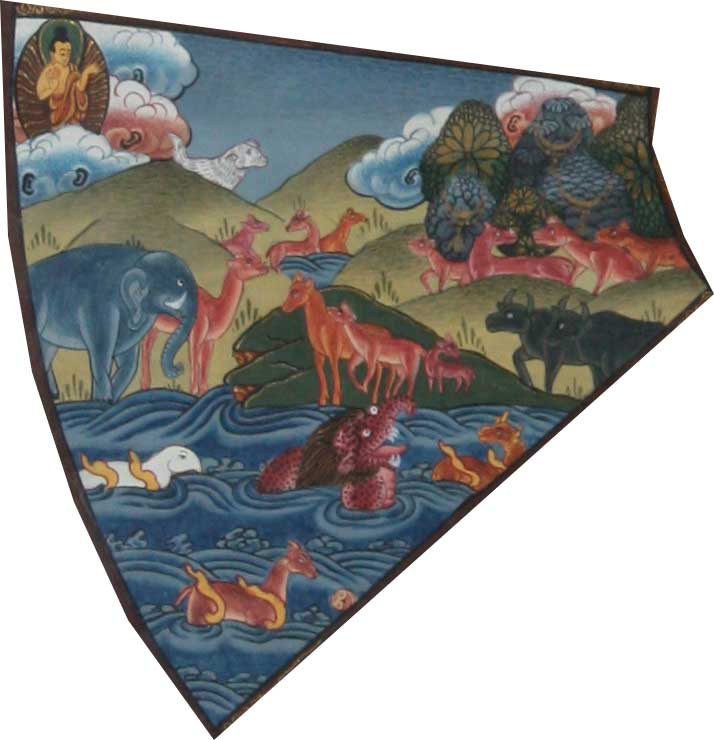 This is the destination of those who had led lives particularly distinguished by ignorance and weakness. Existence as an animal is definitely not easy: they are hunted and eaten by humans or other animals without a moment of rest. Also here there is a Buddha, who with his sword – a symbol for the destruction of ignorance – shows the way out of the realm.

4. The world of the humans 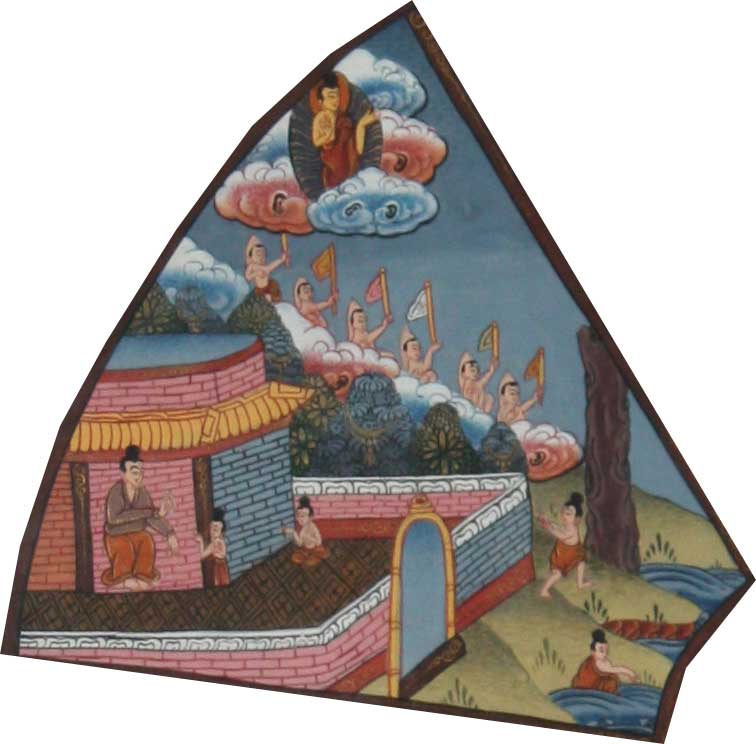 In the realm of humans, and due to their selfishness and passions, people suffer the misfortunes of illness, old age and death. In general, however, this area of life is the best of all six, since man has here access to the Buddhist teachings, and therefore has also the opportunity to escape from the wheel of life (that is, of reaching Nirvana). The historical Buddha, present here, symbolizes this possibility.

5. The world of the gods 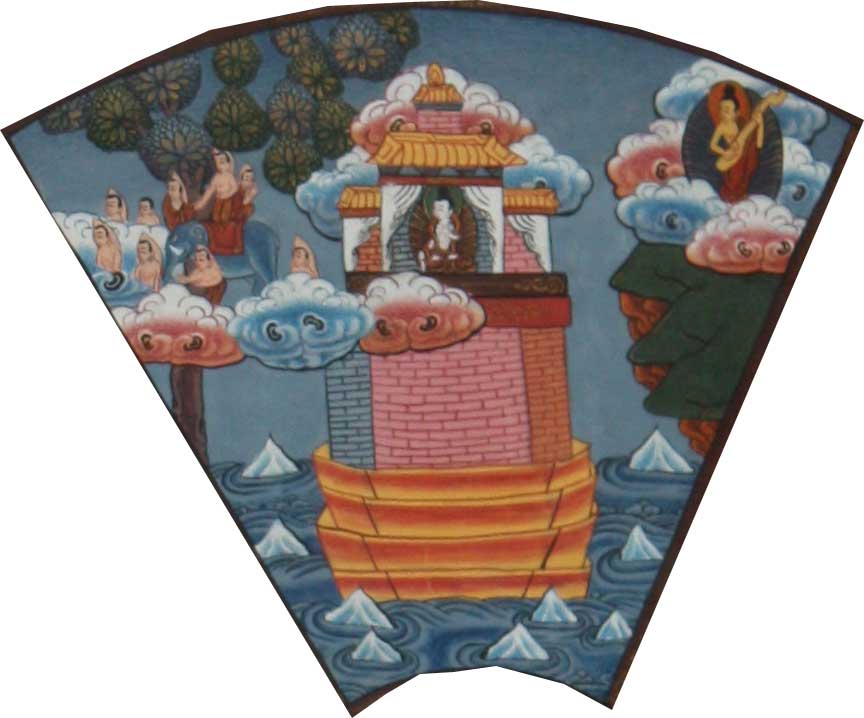 The world of the gods stands for pleasure and the illusion of eternal happiness. Sounds very tempting, right? But this realm is dangerous in its own way: one is never too far from the edge, and as pride and vanity grow inside us, so does the risk of falling back down into the lower reaches of the wheel of life. The Bodhisattva Avalokiteshvara warns us against this, by proclaiming the virtue of meditation.

6. The realm of the demi gods 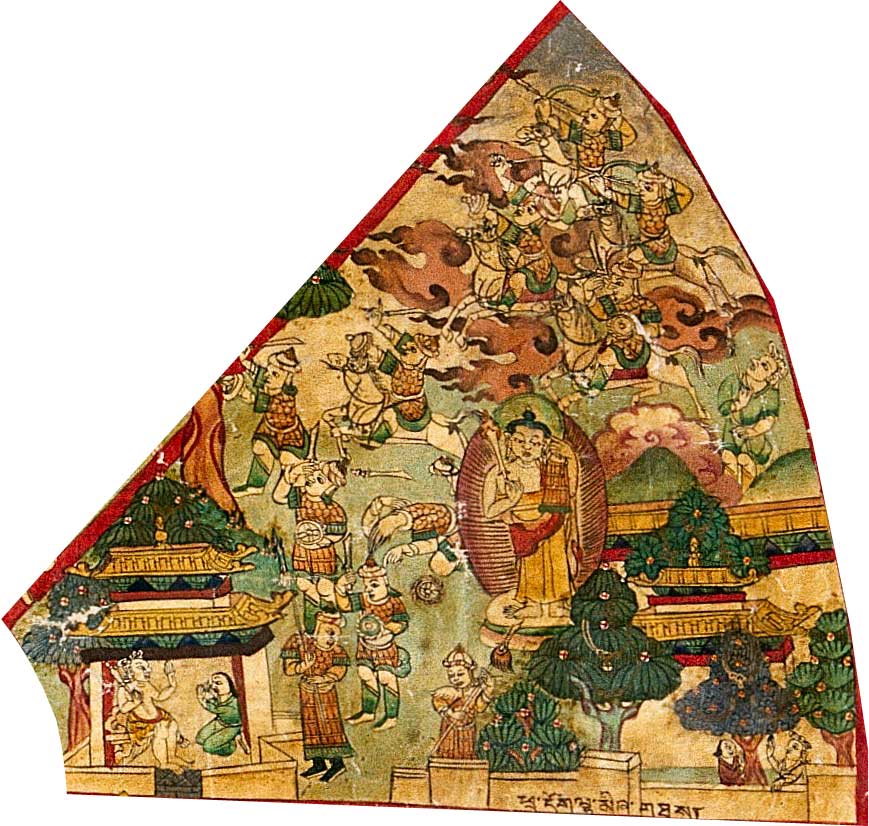 The last of the six areas of life is a world inhabited by demigods in constant struggle, fighting a neverending battle with the gods. They quarrel over the ownership of the Tree of Desire, whose roots lie on the domain of the titans, but whose leafy top, heavy with ripe fruits, rests on the side of the gods. Filled with envy, they fight for the possession of the tree. So it’s jealousy that keeps them trapped in Samsara, the cycle of births. The Buddha in this realm reminds them of this.

Although redemption or illumination are most likely in the world of men, none of the six areas is hopeless. This is illustrated by the Buddhas in each realm, who draw attention to a world full with self-made dilemmas.

The 12 links of the wheel of life’s outer rim will be explained in a future post. 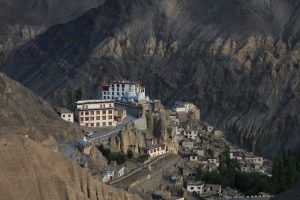 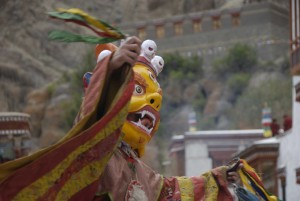 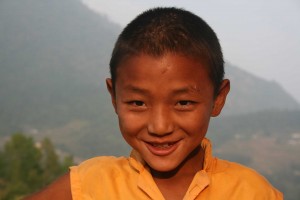 Culture & Hiking in Sikkim
Cultural tour with dayhikes
This travel is ideal to get to know the former kingdom of Sikkim and the colonial town Darjeeling. Beautiful accomodations combines with impressive cultural sites and memorable day hikes.
On date request also possible for single persons
Best time: March-May & October-December